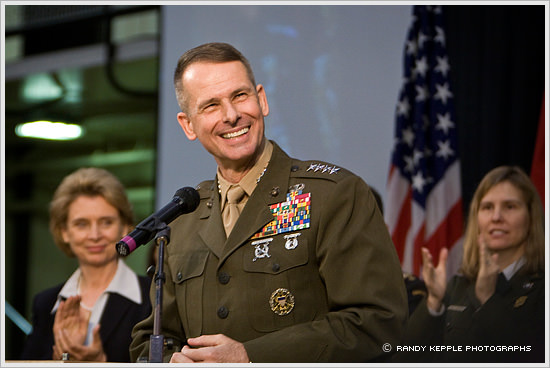 There was excitement in the air as preparations were made to welcome General Peter Pace, Chairman of the Joint Chiefs of Staff. His plane was fighting a strong headwind as it flew to Portland, delaying his arrival by an hour. The General was coming to Vancouver, Washington to speak at the General Marshall Lecture. This is a yearly event that features distinguished speakers lecturing about current world events and the principles embraced by General Marshall. 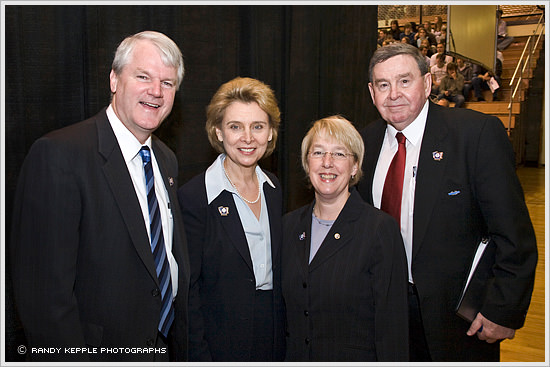 The General arrived by motorcade, escorted by Vancouver and Portland motorcycle police, at the Marshall House on Officer’s Row for a private reception of politicians and local business people. There were Secret Service agents and SWAT members maintaining a high level of security for our nation’s highest ranking military adviser to the President. The private reception, which was cut short, was followed by a lecture at a local high school which was open to the public. In attendance were local politicians: Congressman Brian Baird, Governor of Washington, Chris Gregoire, U.S. Senator Patty Murray and Vancouver Mayor, Royce Pollard 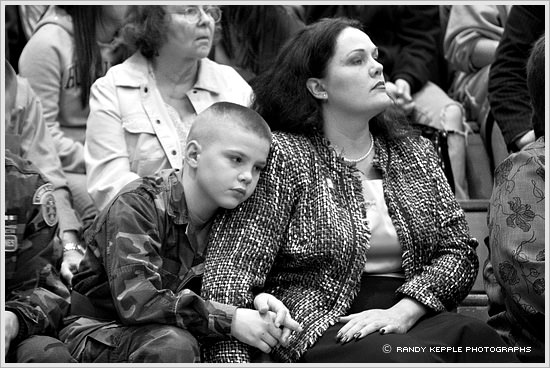 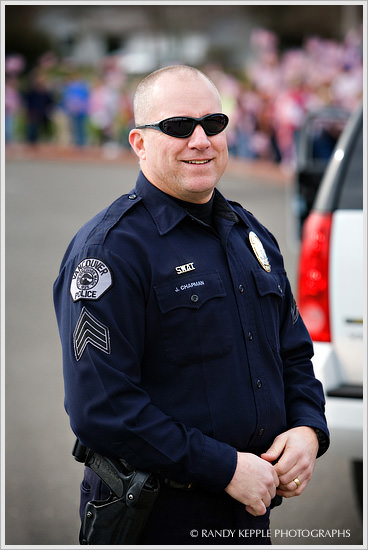 Funny story. When I first arrived at the Marshall House, I was stopped by Secret Service agents. As they were confirming I was on the list, the SWAT commander walked up and said he’d vouch for me. As it turns out, the commander was the father of a bride I photographed a couple of years ago. For those of you following along with my 6 degrees of separation concept, his daughter was in Stacy and Kasey’s wedding and Stacy was a bridesmaid in her wedding.

Another funny story. On this shoot, I was working with photographer Brian Shumaker. He was at the airport waiting for the General’s plane to arrive and I was waiting at the Marshall House. Since the General was delayed, I ended up talking to the Secret Service commander and the SWAT commander on the front porch as we waited for the plane to land. As we were talking, I received a phone call from Brian that the General’s plane had landed and I should get ready for things to start happening very quickly. I hung up and informed both commanders that the General’s plane had landed. The both looked at each other, smiled and the Secret Service commander said “Thanks for the update”. It was at that moment that I noticed the radio ear piece and realized who I was talking to and knew that long before my phone call, they knew the General was on his way. My father and brother will never let me live that one down. 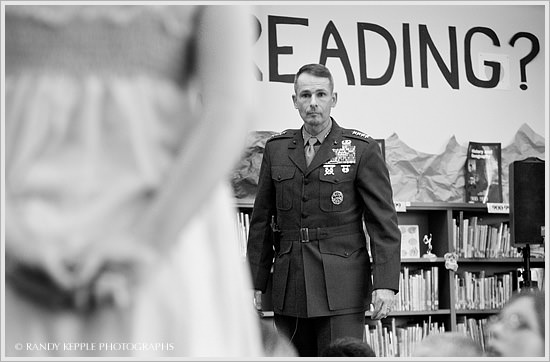 After the General’s lecture at the high school, he visited a local grade school and received questions from the students. These kids really put the General on the spot and asked some very hard hitting questions. I was very impressed with their preparation. They obviously did their homework and the General never flinched. 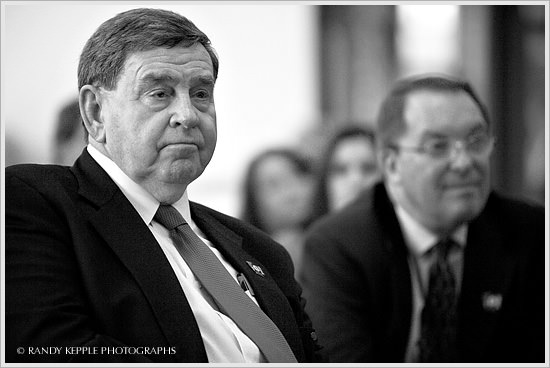 The Mayor of Vancouver, probably glad that he wasn’t fielding those questions. 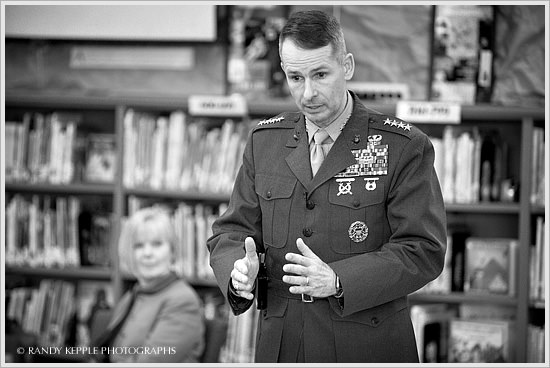 I wanted to capture the General’s passion as he spoke. Like a true Italian, he uses his hands to make his point. I’m very familiar with this form of communication as it’s the same way my wife talks to me. 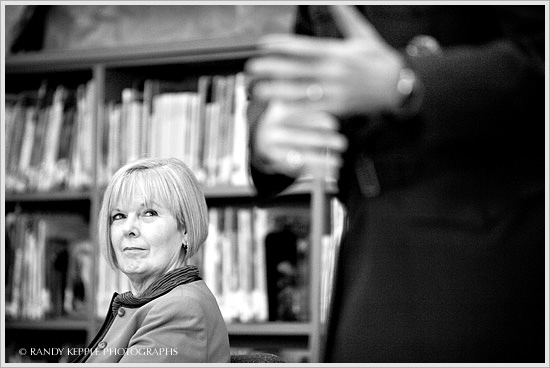 Same vantage point, but I changed my point of view to focus on his wife as he talked to the students. Personally, I feel this is a much stronger, more compelling image about the woman behind the man. 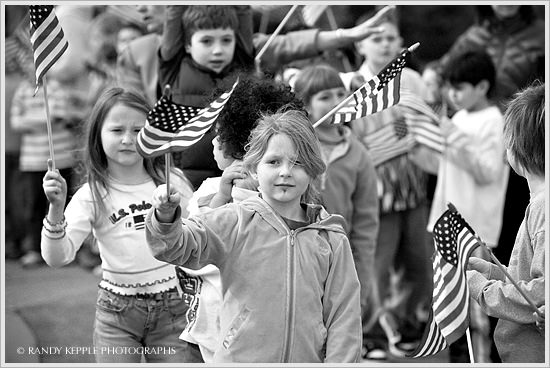 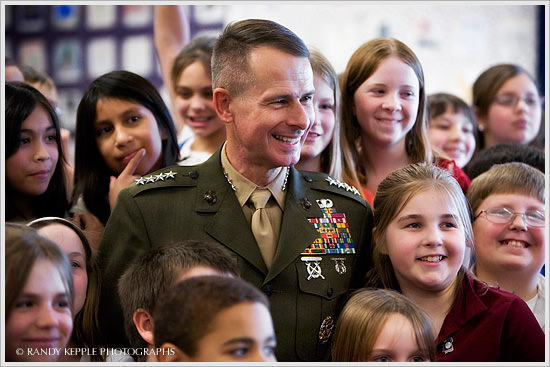 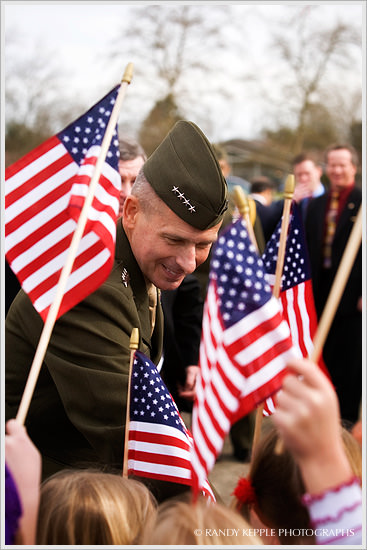 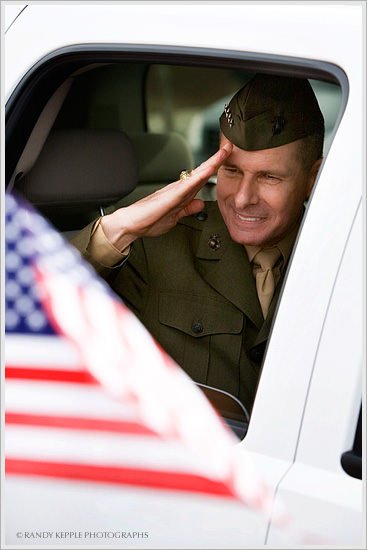 When I was in high school, I wanted to attend the Naval Academy. They sent me a poster and I’ll never forget the words. Some leaders you’d follow through fire, others you’d like to push in. Having met the General and watched him navigate the myriad of politicians and voters and veterans and students, I can honestly say that I was moved. His passion and dedication to our country is unquestionable. My heart swelled with pride and I saw him as a leader I’d follow through fire.

What impressed me most was his attention to the regular people. He didn’t spend much time shaking hands with the dignitaries. He focused on the students and the veterans and on the families who had lost a loved one in the war, the ultimate sacrifice for our country. He paid his respect and gave them his full attention. It’s been a long time since I’ve heard the song America the Beautiful. As the high school band played, I fought hard to choke back the tears. On that day, more than ever, I was proud to be an American and to have met the General when he came to town. As my father said, that is one snappy salute. OoRah!