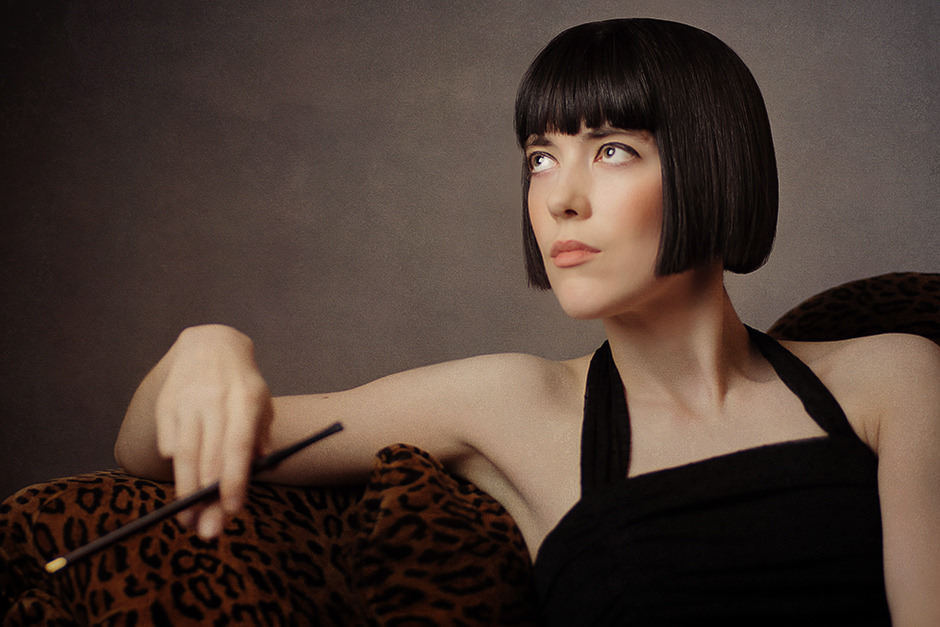 You want to know the secret to creating a great image? Being able to pre-visualize the image in your head before you ever begin. You begin at the end, then open yourself to the creative process as you work towards that vision.

Many photographers struggle with creativity in the studio. It’s difficult to find the organic inspiration you find working on location. Working in a studio with professional lighting gear can be intimidating and challenging. Lensbaby optics are a wonderful way to infuse a creative spark.

Before my Edge 80 arrived, I had already decided to create a turn of the century, vintage inspired portrait. My friend Alain from Oblique Foto, suggested model Rio Vance, who has a Parisian look reminding me of Audrey Tautou from the movie Amelie. I could already see the image in my head.

The Edge 80 is unique in the Lesnbaby lineup because it’s been optically corrected across the lens— a flat field optic with a plane of focus that mimics a view camera or tilt shift lens. Traditional Lensbaby optics feature a sweet spot of sharp focus with blurred edges.

One of my favorite quotes by Alfred Stieglitz is “Technically perfect, pictorially rotten”. Meaning an image can be technically perfect, but it lacks that special something. For storytellers it’s about an authentic mood and feel. And what better way than with the unique smeary blur of a Lensbaby! Really, you ask? Are you afraid of the blur? Don’t be!

Embrace the blur! Close your eyes and think of a favorite memory. Is it in perfect focus? There’s a reason dream sequences in movies are always blurry. It’s important to capture a feeling, a mood. And Lensbaby optics are unique in their ability to render this elusive and creative quality to an image. But how would this translate to a portrait shot in the studio?

My studio time was limited to 30 minutes, so I decided to keep things simple. One light. One reflector. A single light source that was reminiscent of a vintage portrait studio in Paris. A single, small soft box (camera left) slightly higher than her head and a reflector (camera right).

The white studio wall was my backdrop. By placing my model away from the wall and feathering my light, it skimmed the wall and helped create a mood. Setting up my camera on a tripod, I composed my image and started to work on focusing.

Lensbaby optics are totally manual. Your focus and exposure are all done manually. There is no question that this requires a shift in the way you think and work, but it’s not difficult once you embrace it. Focusing is the trickiest part of using a Lensbaby and there are a couple of ways to do it.

My favorite method is simply using the LiveView mode of my Canon 5D-Mark III. This allows me to see and adjust focus in real time. I composed my portrait, tilted the lens until I saw the amount of blur I wanted and then zoomed in to my model’s face to fine tune focus. This requires your model to remain very still, both during setup and shooting.

Another method that was shared by Patrick Shipstad is to use an LED flashlight and shine it on your model’s face so it’s easier to see and make fine focus adjustments. Be sure to tell you model so she’s not blinded by the light! Manually focusing is easier when you are outdoors as there is so much more ambient light. A Composer Pro greatly increases your ability to focus.

The final step before shooting was to determine my exposure. Remember that in the studio, you are shooting completely manual. That means setting your ISO, your aperture and shutter speed manually. I set my ISO to 100 and my shutter speed to 1/125th of a second. The Edge 80 features a built in aperture ring, so I dialed in an aperture of f/4 and fired off a quick test shot. Most times, I use a light meter, but I was racing the clock, so I relied on my histogram to determine exposure.

My first shot was overexposed by 2 stops, so I dialed my aperture down to f/8 and fired off another test shot. This was perfectly exposed. Nice and moody with plenty of detail in my model’s face. But the blur effect was minimized by the increased depth of field. I wanted the shallow depth of field of an f/4 aperture, so I needed to figure how to get there.

There are (4) variables to consider when determining exposure in the studio. ISO, Aperture, Shutter Speed and Flash settings. My ISO was as low as it could go (ISO 100), my shutter speed was fixed at 1/125th and I needed f/4 to get the depth of field I wanted, so I needed to change my light settings.

Remember that f/stop controls flash and shutter speed controls ambient. Studio flash is a constant. A burst of light. Changing my shutter speed essentially changes nothing. Ambient light usually isn’t a factor in the studio. That meant I needed to change the output of my light. By lowering the power of my light and moving it back slightly, I was able to get the settings I wanted.

The final series of RAW image files were processed in Lightroom 5 and brought into Photoshop CS6 for color grading, retouching and artistic enhancements. The model’s skin and makeup required very little retouching. I used RadLab and a custom recipe I created called Portlandia for color grading and finished with a texture overlay. The final mood and feel of the image is what I envisioned before I ever started.

The question I hear most from photographers when I show them my Lensbaby images is why even bother? You can do it in Photoshop! My answer is that it’s completely different and that a Lensbaby gives you creative freedom and a process of discovery that you can’t get in Photoshop.

Sure, there are filters and blur effects you can get in Photoshop, but it still looks different than the organic lens optic effects you get from a Lensbaby. The transitional blur that you get with real optics is different than making a selection in Photoshop and blurring it. The word magical comes to mind. And it’s that process of creation and discovery that creates magic. I have yet to see anyone Tweet or post on Facebook, “just finished the most amazing post production session in Photoshop!”. Being an active participant in the creative process is what connects you to the mood and emotion of the image. Your engagement breathes life and energy into the process.

Don’t be afraid to take your favorite Lensbaby optic into the studio. It’s no different than using it outside the studio. Just remember it’s a manual lens. A tool that brings new energy to your creative space. Embrace the blur!

Have questions about using the Lensbaby Edge 80 optic? Don’t be shy! Inspire a conversation by leaving a comment. Share your thoughts. Do you like the way this looks on portraits? Let me know what you think!