Bad Habits That Crush Your Creativity in Hacker Monthly 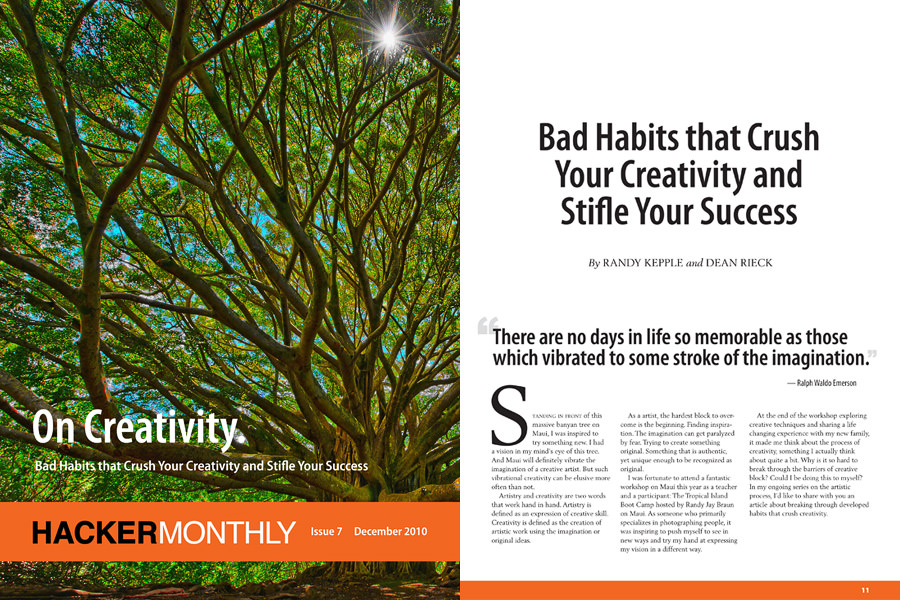 “I am enough of an artist to draw freely upon my imagination. Imagination is more important than knowledge. Knowledge is limited. Imagination encircles the world.” —Albert Einstein

The only thing more fleeting than your 15 minutes of fame is your 3 nano seconds of E-fame. When I posted my article on creativity, 8 Bad Habits that Crush Your Creativity and Stifle Your Success, little did I know what was about to happen.

Thanks to the ticker tape efficiency of Twitter and Facebook, the post was shared and liked, going viral overnight. And by viral, I mean over 5,000 page views in 48 hours, my blog shutting down temporarily due to being overloaded with page requests and more comments and feedback than I’ve ever had on this blog. Excitement is an understatement. There is nothing more satisfying than the resounding crack of hitting a home run out of the park.

After basking in the E-glow for two weeks, I began to hear that little voice in my head getting louder and louder. A voice that was well versed in the 8 habits of crushing my creativity. The fear of failure and lack of confidence. How do you follow up such new found success? Was this a fluke or did I finally find a voice with my audience? After a month passed and my stats dropped back down to the normal sound of crickets on a moonless night, I decided that I was also bound by analysis paralysis. It was time to jump back in and swim with my new friends.

My very first post on this blog was in 2005 and it was entitled “The Blank Canvas”.

The greatest challenge facing any artist is the blank canvas. The vast empty void of nothingness. Full of potential, the energy of possibilities. All that’s needed is inspiration, that creative mortal coil that is so easily blocked. With this entry, my journey has begun. A first step on what I hope is an inspiring path…

Photography has changed more that I could ever have imagined when I started my career 20 years ago. I honestly thought I’d never see the day that digital would ever be a serious consideration. Technology has lowered the threshold and given everyone the ability to create technically difficult images with relative ease. But after “geeking” out for the past decade, I sense a groundswell of interest in the intangible aspect of image making. The elusive mystery of creativity. Something I’ve wrestled and become intimate with the past two decades. It’s refreshing to see there’s an interest in the process. Time to set aside the never-ending fascination with technology for a moment and become more self-aware.

I hope my images inspire you, move you, give you pause. More than that, I hope to share with you the real life struggles of being a creative professional. You have spoken and it’s clear that creativity is something that interests you. Me too.

When I started writing my article, I was furiously writing out thoughts on pieces of paper. Notebooks, receipts—anything laying on my desk. There is so much to share about the creative process that I could probably start a new site dedicated to it. Who am I kidding? It’s been done and done very well, I might add, by many others. That is why I contacted Dean about sharing his article in my post. It very simply outlined 8 challenges we all face, in a way that only a professional copywriter could do. I’ll be sharing my less than professional contribution, in far more detail in the upcoming weeks.

Be sure to check out the December 2010 issue of Hacker Monthly featuring this article and much more. Special thanks to professional copywriter Dean Rieck for permission to share his concise and well written list.

What are your thoughts on technology and creativity? How has one affected the other and what do you sense is happening?