Summer Madness at the Seashore 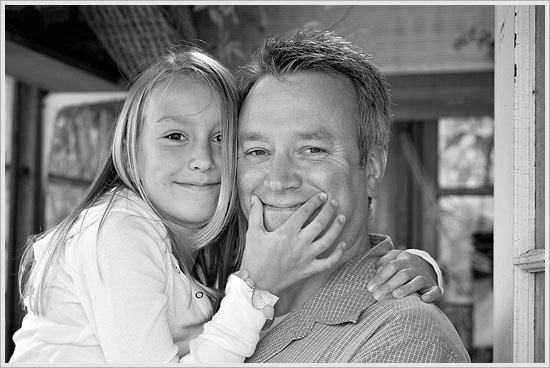 Summer hit full force in July. Today is the last day of the month and I’m still a little dazed with all that’s happened the past 3 weeks. It started with a wedding on 07/07/07. Two days later, we drove to Seaside, Oregon for a week long family vacation. This is an annual tradition for our family—spending a week together with our three daughters during summer break. Then I only had a couple of days to catch up on business before leaving for a destination wedding in Jackson Hole, Wyoming. My return flight to Portland was cancelled in Denver and I was forced to spend the night as a standby passenger for an afternoon flight the next day. Just hours after landing in Portland, I had family arriving for a week long visit. To say it’s been busy is an understatement. 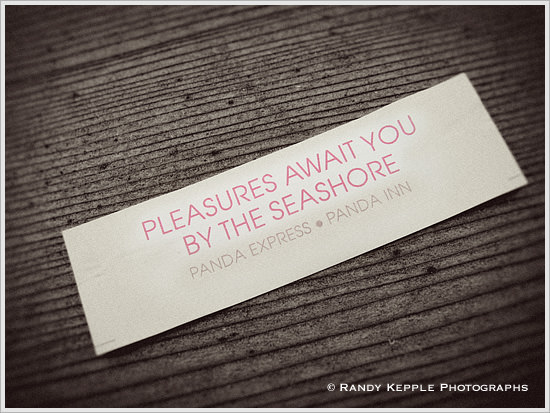 Ironically, this was my fortune cookie the day before our vacation. After a relaxing week of bike riding along the Seaside Promenade every night, canoeing with my girls, roasting marshmallows, soaking in a hot tub with a glass of wine, falling asleep to the sound of the ocean, chasing my girls in the vintage bumper car arcade and showing ’em who’s boss, eating pizza and watching movies, I’d say this fortune hit the mark. 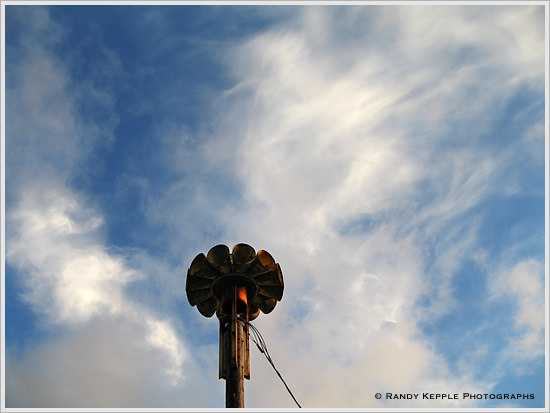 I brought my professional camera to take portraits of the girls, but captured this image with my Canon digital Elph. So many times I hear people comment at weddings that they wish they had my camera, because it takes such great pictures. I like to think that great pictures are made regardless of what camera you use and that vision is more important than camera gear. A great camera doesn’t hurt, but without imagination its worthless. 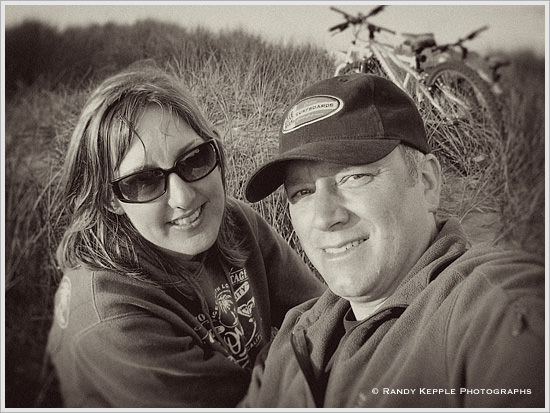 Now that my girls are getting older, they are exploring the art of the hand-held self portrait. My two older daughters are quite remarkable with this skill, so I decided it was time to give it a try myself. This is Tammy and I enjoying a quiet moment on a hill overlooking the ocean as the girls ran through the surf. 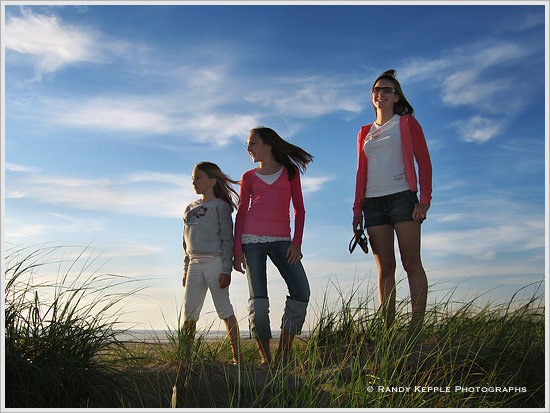 Here are my precious girls. Kaylee, Megan, and Kara, triumphantly returning from their run through the ocean surf. I know they don’t look very wet but they are girls and some things will never change. 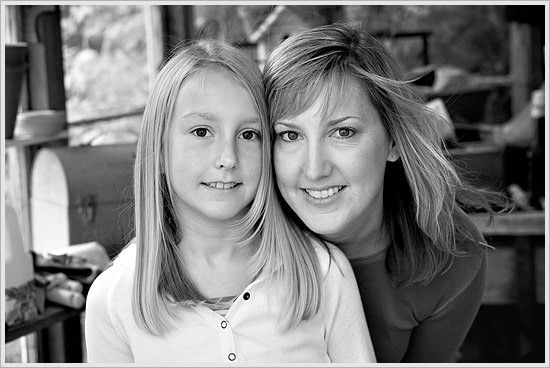 Yes, it’s a curse. I’m always looking for beautiful light, even on vacation and found it in this little garden shed at the house we rented for the week. This is Tammy and Kaylee. It’s frightening how much they look alike. I honestly don’t see any of myself in her. Probably a good thing for a girl.

On the other hand, her mom would argue that she may look like her mother, but gets her attitude and playful sarcasm from her father. The girls are 9, 14 and 16. Between the 9-year-old wanting to be a teenager and the teenagers being themselves, on any given day we have quite a range of emotions. These are a few portraits of my girls against this wickedly cool wall in the rental house with natural light from a door.

One of the better vacations we’ve all shared. It’s always sad when it ends, but reality never seems to leave for very long and another adventure was waiting in the wings. By the way, if you ever want to locate a really cool beach front rental for your vacation in Oregon or Washington, you have to check out BeachcombersNW. We met the owners of this web based business through our daughters (Kaylee and Kylie). They became fast friends in kindergarten and to this day remain the best of friends. We’ve used their listing service for many of our vacations and have always been delightfully surprised. 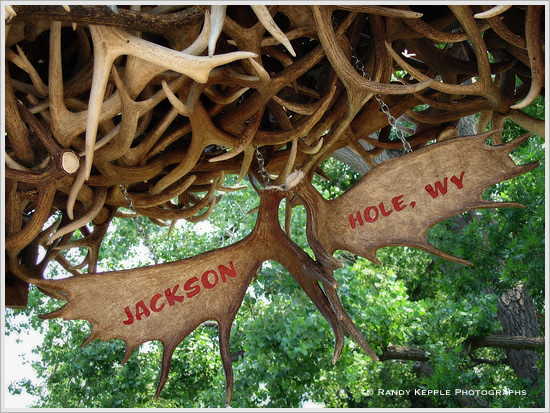 The weekend after vacation, I was flying into Jackson Hole, Wyoming for a destination wedding. What struck me most when we initially landed at the airport is how small it is and how many learjets there were everywhere. This is obviously a playground for the rich and famous. Picked up my rental car and stopped 50 feet outside the airport. As far as I could see, all the way to the horizon, there was nothing but sage brush. I called Jonathan Adams, a friend who’s also a photographer (living in Jackson Hole 3 months a year) for a quick navigation check. I called him my Onstar guide as he graciously gave me directions and even drove out to meet me at the airport and show me some of his favorite shooting spots and how to find the city of Jackson Hole. He told me that the airport at Jackson Hole was the only airport located in a National Park. That explains the size and the abundance of sage brush. 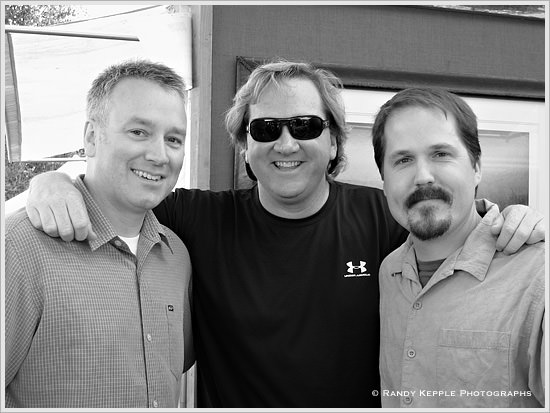 Yours truly, Jonathan Adams (JD for short) and Shane Knight. Jonathan introduced me to his dear friend Shane, a truly gifted artist. During my free time, I hung out with Shane at an art show being held that weekend. I fell in love with more than one of his images and wish I could afford to buy a couple of them. Shane’s the genuine article. Horse wrangler, photographer and all around nice guy. A modern day western cowboy. I was in awe of his stories surrounding his images and how he captured these silent moments in the mysterious world of horses.

Jonathan introduced me to the Million Dollar Cowboy Bar and one of the best breakfast burritos I’ve ever lifted to my mouth from a place called “The Dog.” If you ever make it out to Jackson Hole, Wyoming take the time to find the “Dog” off the square. I think it stands for “Down on Glenwood” street, but couldn’t find anything on Google. It’s there, just ask the locals. 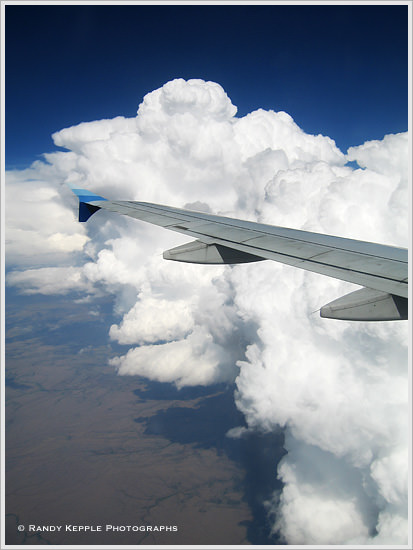 The weekend ended with a quick flight from Jackson Hole to Denver past some very ominous looking thunder clouds. After a quick layover in Denver, I was informed that my return flight had not left Portland and would be delayed at least 3 hours. After waiting 2 hours for an update, I was told the flight would be cancelled. What ensued was a mass of travelers scrambling to the ticket counter to reserve their spot on the next available flight and a hotel room. I was given a room at a very nice hotel (half an hour away) and a standby ticket for the next afternoon.

I’ve always admired the Denver airport, having transferred through there a number of times. I’ve never been stuck at the Denver airport, or had to leave on a flight that originated from Denver. Having done both on this trip, I will avoid that airport at all costs. The word waiting is one that you better get used to when using the Denver airport. Waiting at the Alaska Air ticket counter for hours to get your travel plans sorted, waiting for your luggage, waiting for the shuttle that seemingly never arrives, waiting in line at the hotel to check in behind all the other stranded passengers, waiting for hours going through the massive lines at airport security the next morning, waiting in long lines for a bagel and orange juice, waiting for what seemed like days to find out if you were leaving anytime that afternoon on standby, hopefully before your out of town family guests arrived later that evening…waiting, waiting, waiting.

It’s been a month of madness. Summer madness. And yet, just as I tell all my wedding couples, the story includes all the things that go wrong. No one revels in a story about a perfectly planned trip or wedding. They want to hear about the things that went wrong. Thankfully, aside from that trip, the month was full of the love and warmth of family. I met a lot of new friends and had a great adventure. My girls are growing up so fast and I’m very proud of who they are and the choices they’ve made. Now it’s time to get back to work! Enjoy your summer!